2022 World Cup on Dec 5, the teams playing are France 3 Poland 1, England 3 Senegal 0, both favorites won in normal time, without having to resort to extra time or penalties in this quarter-final game.

Day 15 of the World Cup saw the second set of round 16 matches played. And yet again, both favorites won in normal time, without having to resort to extra time or penalties. 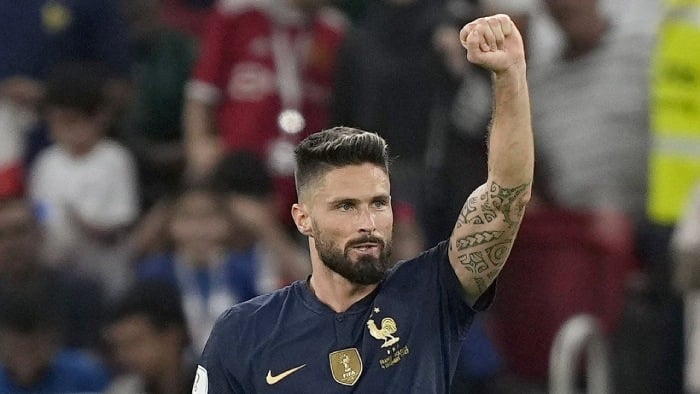 The defending champions France roared into the quarter-finals of this year's World Cup with an utterly convincing performance against a Polish side that was flattered by the final scoreline.

Although France had enjoyed the lion's share of chances and possession, it looked like the two teams would head into half-time, level, before a simple ball through the middle found Olivier Giroud, who applied a clipped finish past former Arsenal teammate Wojciech Szczesny in the Poland goal.

It was a landmark goal for Giroud because it took the 36 year old past Thierry Henry's all-time goalscoring record for France. He now holds the record of 52 by himself.

The center-forward had expected just to play a peripheral role at this World Cup, but pre-tournament injuries to Karim Benzema and Christopher Nkunku have presented him with an unexpected opportunity, and he has taken full advantage.

Giroud was also involved in the second goal, which actually began with a Polish attack before the French broke up the field.

The ball was eventually squared to Kylian Mbappé on the left edge of the penalty box, who took one touch to set himself, before hitting a vicious shot that moved in the air past the despairing dive of Szczesny, who, in reality, had no chance of saving him.

Arguably, his second goal, in the 90th minute of the match, was even better. The ball was fed to him in the inside left area in the box and he smashed his shot into the opposite top corner. Again, Szczesny could just watch as the ball whistled past him. 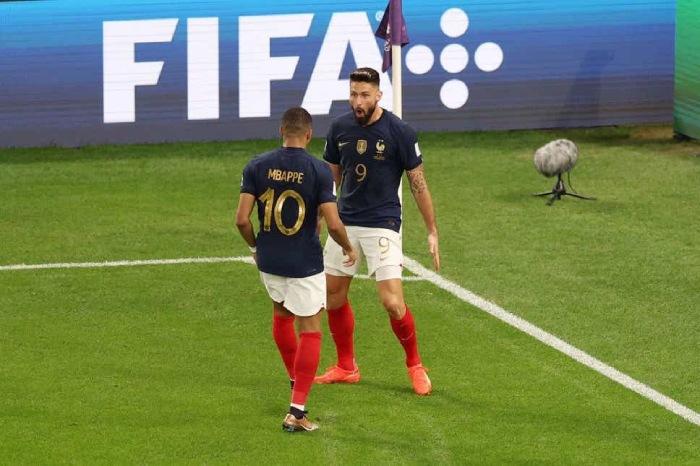 Poland was well beaten by this stage, but they did end the match with a consolation goal after they were awarded a penalty when Dayot Upamecano was adjudged to have handled in the box.

Robert Lewandowski took it, but his penalty was weak, and easily saved by Hugo Lloris diving to his left.

The referee, though, ordered the kick to be retaken and although Lewandowski's second effort was no more convincing than his first, Lloris had gone the wrong way this time.

That was the signal for the end of the match, and, as the final whistle blew, Lewandowski could only congratulate Mbappé, who has now moved two clear of a pack of four other players for the Golden Boot award, and his two on the night means that he has scored exactly 250 goals for club and country and he is not yet 24.

If somebody has hopes of wresting the World Cup away from France, then they need to come up with a plan as to how to neutralize Mbappé's threat.

France's next opponents will be England, who, ultimately convincingly beat a Senegal side, although they started the match slowly, and the early chances fell to Senegal. Boulaye Dia blazed over from close range, before England's failure to clear the ball, saw him given a chance on his left side which England goalkeeper Jordan Pickford blocked with his arm.

It would be almost the last thing that Pickford would have to do all night.

England then took the lead when Harry Kane picked up the ball deep, and then played the ball into the path of Jude Bellingham, who drove to the edge of the box before playing the cross through to Jordan Henderson, arriving late, to side-foot home from close range.

The 19 year old Bellingham had a big part to play in the second goal as well which arrived on the stroke of half-time and effectively killed off the match as a contest.

It began with a failed Senegal attack and when the ball fell to Bellingham deep in his own half, he strode forward, and hurdled a couple of tackles, before releasing the ball to Phil Foden.

He had the presence of mind to pass the ball straight on to Harry Kane, who took a touch to steady himself, before blasting his shot at Édouard Mendy in the Senegal goal. It was the first goal of this World Cup campaign for the England captain.

That goal takes him within one of England's all-time records of 53, which currently belongs to Wayne Rooney. 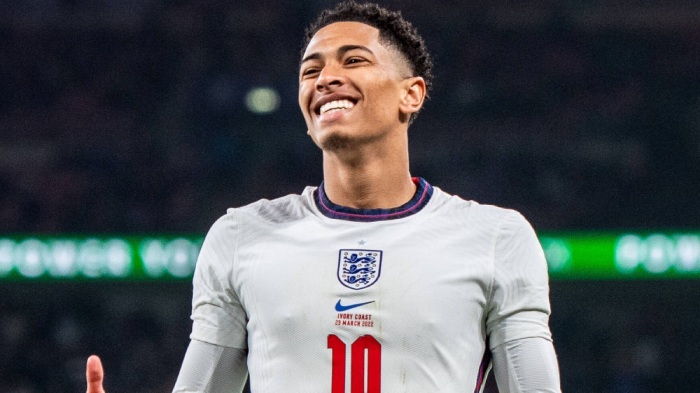 Any remaining hopes that Senegal had remaining were ended in the 57th minute when Foden broke on the left crossed and found Bukayo Saka who got to the ball before the goalkeeper and defender and just clipped the ball into the net.

That was the end of the game as a meaningful contest. Senegal's heads went down, whilst England could afford to make wholesale changes, saving the legs for the challenges to come. They might have had more goals but were happy to settle for the three they had already accumulated.

They also kept up their record in Qatar of not having picked up a single yellow card in any of their four games so far.

The Senegal manager Aliou Cissé, who had gotten out of his sickbed to attend the game, may have been left ruing the absence of the main striker, Sadio Mané, who was injured on the eve of the tournament, and who might have made more of the chances that came the way of his side.

It also means that Morocco is the last standard bearer for Africa in the World Cup.

Meanwhile, the host of clubs across Europe who wants to sign Bellingham will realize that his price has just gone up by several million pounds at least.

France will now play England in the first of the quarter-finals on Friday, December 9th. Due to the presence of Mbappé on their side, France may be considered the marginal favorites, but England, who were in a poor run of form coming into this tournament, are evolving as a team, so should not be discounted at all.