Ali Baba slot machine is a thrilling game from the JILI slot. This slot has 32,400 paylines and Megaways. The game features some impressive graphics which enhance the vibrant Arabian theme. How To Play Alibaba Slot Machine? The result of the selection determines the multiplier of the treasure chest symbol in the free game, even up to X4!

Ali Baba slot machine is a thrilling game from JILI slot. This slot is 32,400 paylines and megaways. The game features some impressive graphics which enhance the vibrant Arabian theme, including a thieves, ring, blade, golden coins, dais, princess and number characters.

The story of Alibaba is a folklore tale and was featured in the collection 'One Thousand and One Nights. It has become one of the most familiar "Arabian Nights" stories and has been retold widely across the globe. The story goes that Ali Baba was a poor woodcutter who discovered a thieves' den. This mysterious hideout could be magically opened by saying "Open Sesame". When the thieves find that Ali Baba has discovered the secret den, they attempt to kill him, but his loyal slave-girl manages to stop them and kills them. Alibaba keeps the secret of the den full of treasure and his son marries the slave girl. In this game, we can see the main characters of the story, Ali Baba, the girl and one of the thieves. The game is set in an Arabian town at night and gold and jewels glitter and glow at the front of the scene. A whole host of Arabian-themed symbols all add to the theme.

How To Play Alibaba Slot Machine

Free Game Take A Bet and Spin the Wheel 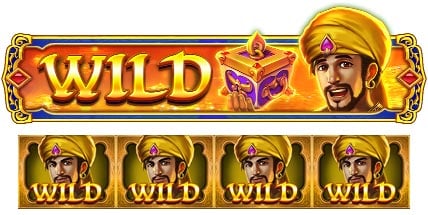 Try an online slot casino for FREE! Use any of our great Register Welcome Bonus and Deposit Bonus. Just sign up and start playing in HaloWin!