The best thing about the new football season? GOALS. We've seen some absolute belters scored in England, France, Germany, Italy, and Spain over the past week - so many, in fact, that it's hard to pick just 5.

But that's the number we've limited ourselves to in this FIFA Highlights article. Do you agree with these or have we missed out on your favorite? 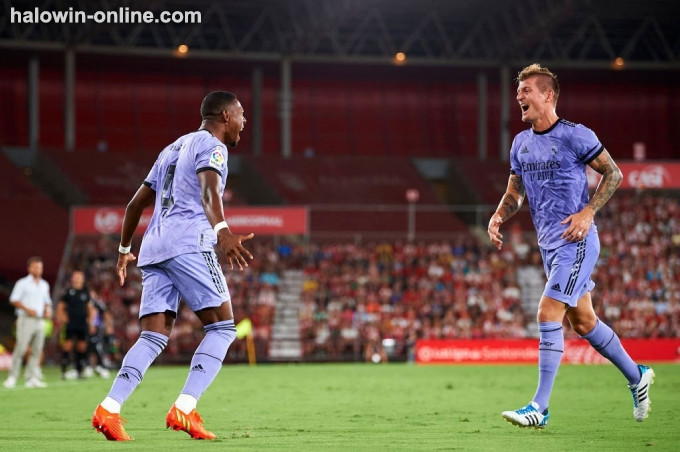 Real Madrid's La Liga title defense didn't get off to the ideal start in Algeria - the home side took a shock lead six minutes into the game when Belgium youngster Largie Ramazani caught Los Merengues' rearguard napping, and broke the offside trap to score past Thibaut Courtois.

Real kept probing, with Benzema and Vinicius Jr among those who missed good chances to equalize. Almeria goalkeeper Fernando Martinez Rubio was having a superb match to frustrate the visitors and he wasn't beaten until the 61st minute when Lucas Vazquez pounced on a rebound to level the scores at 1-1. Then, 15 minutes later, the game was settled - and in style.

A foul on the edge of the hosts' penalty area gave Real a dangerously positioned free kick. David Alaba lined it up and expertly curved it up and over the wall, bringing it down just enough to fly into the top right-hand corner of the net. Perfection, and already a contender for one of the best free kicks of the season.

What a start Gabriel Jesus has made to his Arsenal career. In the Gunners' season opener against Crystal Palace, the Brazilian's movement was electric. He looked sharp on the ball and full of running.

In the North London side's second match of the season - Gabriel Jesus's home debut - opponents Leicester had no answer to his energy. He scored twice before half-time and missed several chances for a hat-trick. He also chipped in with two assists. A virtuoso performance.

At his old club Manchester City, Gabriel Jesus was never really his first choice, although he notched 58 Premier League goals for Pep Guardiola's side. At Arsenal, the 25-year-old is the focal point of the attack and the early signs are he's thriving.

His first goal against Leicester was an absolute 'worldie'. With three defenders for the company he showed exceptional balance - and quick footwork - to dig the ball out from behind him and loop it over the keeper.

If his goal-scoring exploits continue, Gabriel Jesus will be in the mix for a place in Brazil's starting XI in Qatar. It's unlikely he'll lead the line with Neymar also in red hot form. But a role on the left side of an attacking three could be on the cards.

The former Napoli center-back is fast becoming a fans' favorite at Stamford Bridge, helped in no small part by his superb goal against old enemies Tottenham.

Physically, there aren't many more intimidating defenders than the Senegalese, who was nicknamed 'The Wall' during his time in Italy. He's certainly shown he has the attributes to thrive in the Premier League, based on his first two performances.

That said, his goal against Spurs was more about superb technical ability, rather than overwhelming strength and power.

On 19 minutes, Marc Cucurella, another of the Blues' summer signings, whipped in a beautifully flighted corner. It fell to Kalidou Koulibaly, who was hovering unmarked near the penalty spot. As the ball dropped he volleyed it into the bottom right corner of the net and his technique in getting his right foot over the ball was sublime.

In the end, the game finished 2-2 with Antonio Conte's Spurs showing resilience, although they rode their luck with a few generous refereeing decisions. One of the main takeaways from the game is that Kalidou Koulibaly has the quality to become one of Chelsea's most important players.

A Man of the Match performance from Manchester City's Kevin De Bruyne is nothing new. The Belgium star has been a star turn for Pep Guardiola's side for several seasons now and is arguably one of the best midfielders in Premier League history.

But does that mean it's become boring to watch him? Not at all. Against Bournemouth, his display was magical. After City took the lead through Ilkay Gundogan, Kevin De Bruyne took center stage.

His goal -- the reigning champions' second of the afternoon - was vintage stuff. Starting on the right wing, he ran at the Cherries' defense before curling the ball with the outside of his boot and inside the far post. It was a sumptuous finish.

Unai Emery's Villarreal made it to the semi-finals of the UEFA Champions League last season, and has recently secured the permanent signing of Tottenham's Giovanni Lo Celso - one of their star players in the 2021-22 campaign - hopes are high for the new season.

But it was another player, Alejandro Baena, who stole the headlines in the Yellow Submarine's opening La Liga game against Valladolid. He scored two goals - the second of which was an outrageous strike from distance.

The 21-year-old had only made a handful of appearances for the club before starring in Game Week 1 - he spent last season on loan at second-division side Girona, where he scored 5 goals in 38 appearances. Now he may have forced himself into the reckoning for more regular first-team football.