Evolution Gaming seems to have found a new niche market for itself with Lighting Dice. A new product in its lightning range, it offers electrifying gameplay that breathes new life into dice games. If you’re looking to place a Halowin bet on Lightning Dice but you don’t know where to begin, this is the guide you need.

Evolution Gaming seems to have found a new niche market for itself with Lighting Dice. A new product in its lightning range, it offers electrifying gameplay that breathes new life into dice games. If you're looking to place a Halowin bet on Lightning Dice but you don't know where to begin, this is the guide you need.

We'll cover more about this exciting game, how it works, and what the best Lightning Dice strategy is. It's a pure chance-based bonanza for fans of dice and luck-based games like you've never tried before. 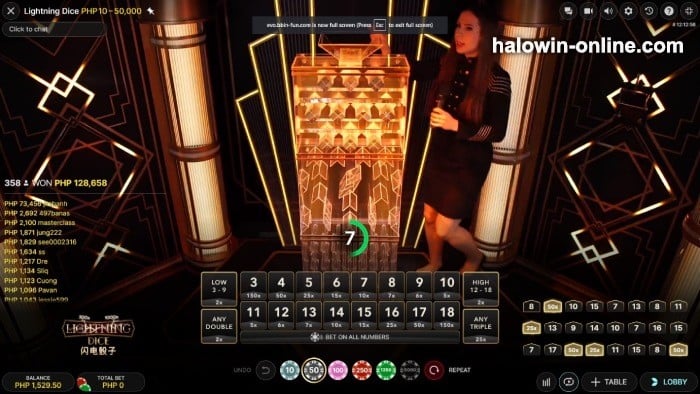 What is Lightning Dice?

Lightning Dice is an innovative live game by Evolution Gaming that takes a twist on the familiar dice-throwing gameplay. It takes the game of dice and spins it into something you haven't seen before. The game is part of Evolution's Lightning lineup which also includes Lightning Roulette. The concept is the same - random numbers are picked to be struck by lightning, meaning fantastic multiplier action for you all.

The game has an easy learning curve, but it would still be a bad idea to play without a Lightning Dice strategy. Its visual presentation is sublime. Streamed in high-def video quality from the best Evolution casinos, Lightning Dice sets the tone when it comes to visuals. The hosts are professional and polite and know their job pretty well. All the stats and betting chips are laid out in the bottom, with the camera smartly catching the action so it doesn't interfere with your betting.

We loved the animation effects when lighting strikes. The dice are thrown by the dealer, who puts them through a box with many obstacles for a fair chance. This ensures that the dice will drop to the bottom randomly and possibly deliver you a nice win.

How to Play Lightning Dice Live

Playing Lightning Dice Live isn't hard at all. The screen's layout and simple controls make it easy to get your bearings. Once you enter the game, you'll be greeted by a professional host that runs the game. The obstacle course for the dice is right in the middle of it all, surrounded by lightning that strikes multipliers on the betting board beneath the machine.

You'll be presented with a virtual bet adjuster that lets you pick the Halowin bet you prefer. You can chat to the dealer or use the settings button to personalize the experience by accessing the buttons in the top right corner. Keep in mind that you're not the only player in the game - it's open to everyone.

The key is to pick a chip and place it on the numbers. You can bet as many as you like. Pick one number or pick them all - it doesn't matter as long as you do it until the timer runs out. The betting session lasts for 15 seconds, so think quick and pick your favorites before time runs out. Aside from the numbers, you can also bet on a low or high number range, any double, or any triple. The respective payouts for each option are clearly displayed.

The mechanics in this game are simple. It's a game of dice where you're betting on the outcome of the roll. Three dice are put through an obstacle course in the machine, and they roll through it in just a few seconds before falling down. The result is instantly announced and all winners are paid right away. 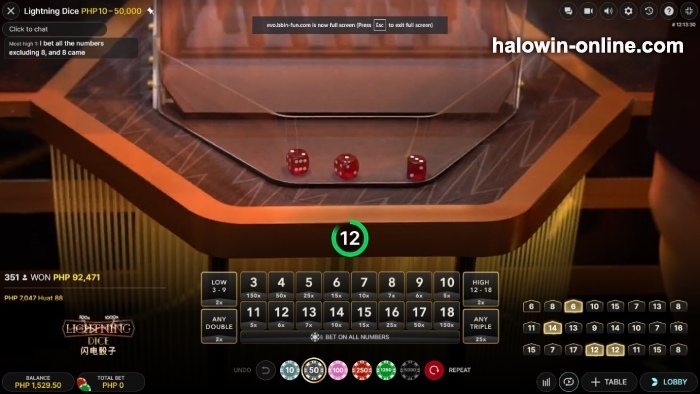 Now, the highlight feature of Lightning Dice Live are the lightning strikes. Just like in Lightning Roulette, a few of the numbers on the board will be electrified before the dice are rolled. This occurs randomly and it might or might not strike your numbers. The good news is that the system allows you to repeat the last bet and to bet on all 16 numbers with a single click.

Bets range from $0.20 to $2,000, so you have plenty of options to pick from in between. The bets are displayed as chips with a number, and you can bet whatever chip you want on all the bets. You can even bet on all 16 numbers with a different chip.

Once the dice falls through the end of the machine, the results are announced. If you win, a nice animation will display in the center. You'll hear the game rumbling if you scored a Lightning Payout which can boost your winnings randomly up to 1,000x. Any base game payout is great since they pay up to 150x, but a Lightning Strike is what we're all hoping for.

The Lightning feature is the only bonus available in Lightning Dice Live. And what a bonus it is. By boosting any payout randomly before the dice are thrown, you can win instant rewards up to 1,000x the bet. How's that for a bonus?

Playing the game without a strategy would be a mistake. Sure, lightning strikes randomly and this is a game of chance, but you can still come up with any kind of strategy that would increase your winning chances. For example, the top payouts are on numbers 3 and 18. Of course, these numbers come up the least, as you can only score it in two combinations - 3x6 or 3x1. Both pay 150:1, and when you take into account the fact that they can be boosted by the highest multipliers—x500 and x1,000—betting on them all the time is a pretty good strategy. 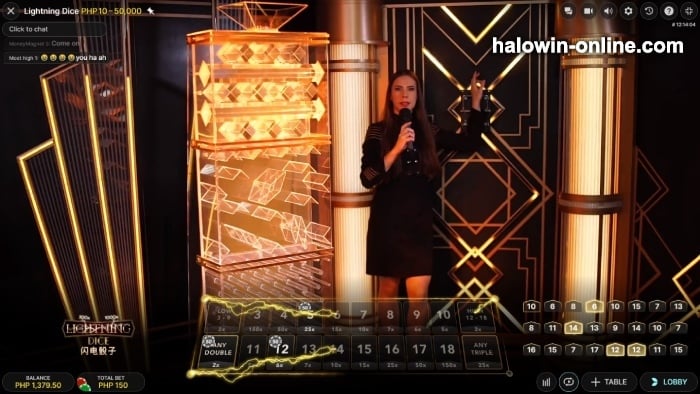 Even if you lose consecutively, one strike on these numbers will be more than enough, even at base payout. If they're lit up, then it's for the better. Their house edge is a bit lower when compared to other numbers (3.79% vs. 3.97%). It's almost 0.20%, which isn't a small difference. However, ultimately and in the long run, this is the best possible Lightning Dice strategy you can use.

There's another Lightning Dice strategy known as Hit & Run, but it's a risky one. It means betting on all the numbers non-stop, which obviously requires a large bankroll. If you're feeling in a winning mood and you think you can strike a number with this strategy, then go for it. But, we'd suggest setting a target profit, then stopping once you've reached your goal.